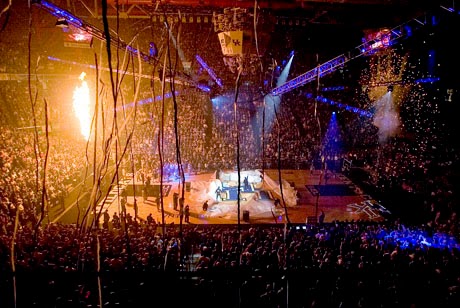 Once again, after proclaiming how much it wants and needs the support of the Big Blue Nation, UK has acted to scorn them…needlessly.

I am not privy to those negotiations, but why in the world would UK give away rights to let local TV stations (and others thru out the Commonwealth) carry Big Blue Madness???

Now remember, I worked 15 years for channel 27, but I write as a UK fan…I know UK had to give the rights to its sports games away to establish the SEC network, but the Madness is not a game. Sure, SEC and ESPN would love to have those rights...we are the Notre Dame of college basketball, but..in doing so, UK acted against the best interest of its fans..forcing them, in many cases,  to pay to see the Madness they once got for free.

Makes no sense to this fan, and I hope members of the BBN will let UK’s Athletic Director, Mitch Barnhart know their fury..maybe, maybe next year will be different.  It should be.

BTW, aren’t we all proud of the UK Football Cats?  Not only did they play a great game against #1 last week..but, a fact glossed over by many, both UK and Miss State played with very, very few penalties..something you don’t ordinarily see in such a hard fought game.

Congrats to all the football Cats, too!

Ken Kurtz
Former host of "This is Kentucky" on KET and member of the Kentucky Journalism Hall of Fame.